When you produce an event you are placing the reputation of both yourself and your company on the line. Having a professional Vancouver Emcee will go a long way to ensuring your success and Scott Barratt is as professional as they come.

Scott has hosted everything from televised awards shows to live & closed-circuit sporting events seen around the world and tons of corporate events. Scott has a varied skill-set that gives him the ability to handle the unexpected and tie your event together with a smooth finish that will take it to the next level.

He’ll bring a million-dollar voice, rapier-sharp wit, a major-market image, professional writing and verbal skills and a great attitude to your event.

Scott Barratt can be the glue that holds your event together whether he is stalling to cover for a tardy presentation, editing a poorly-written piece of material on the fly, 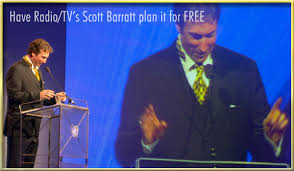 Adding some tasteful humor to elevate the energy or just bringing the polish of having a TV veteran as the face of your event.